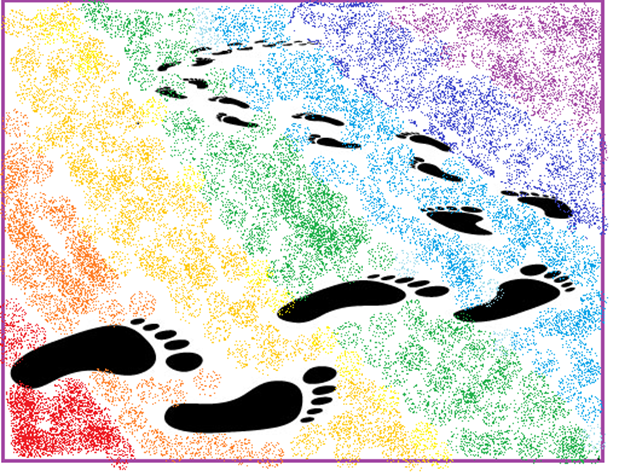 As She Grows Up

Naomi must have grown 3 feet this past year!"  One of the camp counselors tells me.
"Yes, I know.  I need to put her on a 'stop growing' medication."
She's 5 feet tall, 86 pounds, and wears a size 8 shoe.  Much greater measurements than you see in a typical 9 year old.  This isn't a post about "my little baby growing up much too fast." Although I can relate to that sentiment.  This is about autism as the people who have it get older. Where is their place in the world?  It's something I really didn't think much about in the first few years following her diagnosis.  Everyone said it gets better after all, so I figured we'd cross that bridge when we came to it.
Naomi has made progress over the years, but  the behavior that was acceptable or even 'cute'
as a child is not so easily accepted now.  For example Naomi has an impulse to smell little girls hair.  It's basically harmless; the curiosity and discovery of a child in toddler years, but now other people see it as a little creepy.  She follows little girls around and imitates their activities.  Yes, in the past there have been looks and comments that made it clear that she was in the way and not welcome, but now...it's seen as more than a little unusual.  As she grows up I worry about how it will be interpreted.    Anytime older people are interested in little girls, people assume the worst.  It can't be easily addressed by telling her to change her behavior.  She doesn't have the perspective to understand why anyone would be bothered by it and her actions are very impulsive.   There are other innocent behaviors that people find unsettling to see in a teenager or adult.    In a child, people are expected to me more understanding; unusual behavior from teens and adults is perceived as being unsafe.
I also worry because Naomi is constantly on the go.  She is completely unwilling to stay at home for a day or even a significant part of the day. So I wonder "What kind of activities are we going to do as she grows out of the things she does now?"
She is growing out of the playground equipment, she's not allowed on the kiddie rides at amusement parks and I wonder how much longer she can keep going to bounce houses.  I spoke to another autism mom about this the last time we were at a bounce house and she said. "We won't be able to take them out as much when they are older.  We'll have to find more things for them to do at home." This  does not seem like a reasonable option for me.  More than a few hours at home makes Naomi anxious, restless and very difficult to live with. I also worry about my own energy.  This non-stop, on-the-go pace of life has taken it's toll on me in the past few years.  I'm okay with it now, but I wonder "How long can I keep this up?""What are we going to do to replace all this running around?"  Even now I'm always looking for more things we can do and places we can go that will keep Naomi entertained and also be safe and appropriate.
I had come to accept that I couldn't mainstream her into dance classes or sports, or even leave her in regular day care.  I learned that I would have to be a helicopter mom that followed her around and guided all her actions.  But now we're at another threshold and I'm worried.   The activities she is cognitively suited for are not suited for people her size. She does not have the awareness and behavior to match the activities for people that are her age.  Staying at home is not an option and even if it were, I don't believe she should have to stay home just because she is tall and unusual.   Still, the future is coming upon us and I don't know where we are headed.

Before I let my thinking get ahead of me, I have to remember to take it one day at a time.  The truth is that we've been pretty lucky about finding places to go and things to do until now.  I just want that lucky streak to remain with us. We'll get through the adolescent and adult years as they come always looking out for other possible options as we move into the future. And if there is one good thing about a growing autism population, it is that we probably won't have to do it alone.
Posted by Shanti at 9:12 PM